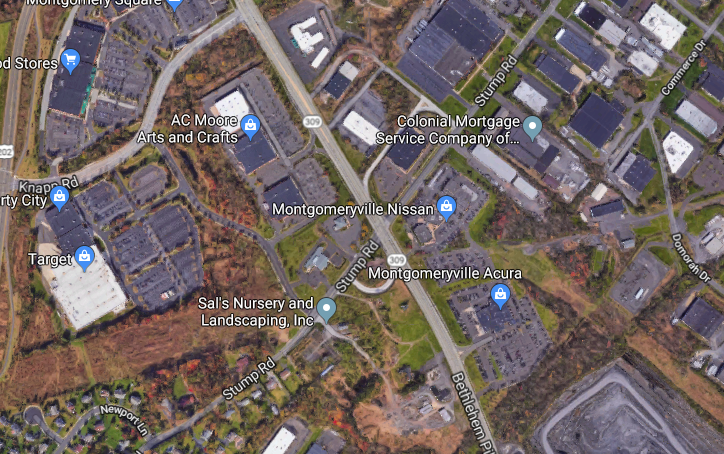 MONTGOMERY TWP. >> Plans for a project to add several new retail buildings, including a Wendy’s restaurant and Wawa, at the corner of Bethlehem Pike and Route 309 continue to move ahead.

Montgomery Township’s supervisors have approved a submission to PennDOT for two new traffic signals related to that project, the next step in the approval process.

“There are four traffic signals: two are being upgraded, and two will be brand new, and the board authorized the submission of the application to PennDOT,” said Township Manager Larry Gregan.

Starting last November, the township supervisors have seen and discussed a plan on behalf of John Antonucci, owner of Sal’s Nursery and Landscaping, to create a complex of several new buildings surrounding the current nursery, including a Wawa, a Wendy’s and a Citadel Bank branch. A new roadway would be built across from the current Witchwood Drive, and new traffic signals would be installed on Stump Road at Witchwood, and on Bethlehem Pike where the new road enters and exits the highway.

Two other signals would be adjusted: the existing signal at Knapp Road and Witchwood Drive would have the left turn lane onto Witchwood extended, and the signal at Bethlehem Pike and Stump Road would have a third through lane added to southbound Bethlehem Pike, a new pedestrian crossing, and updated cameras.

In December the board granted conditional use approval for the project, and spelled out the terms of doing so in January, which included getting approval from PennDOT and several other outside agencies.

“That project received conditional use, and preliminary final land development approval. The engineers are submitting revised plans to meet all of the conditions in that approval,” Gregan said.

“They are subject to conditions, technical conditions, for engineering items, including getting different agency approvals such as PennDOT for these signals,” he said.

Other outside agency approvals include with the township’s sewer authority to handle new flow from the site, and with the Montgomery County Conservation District, plus a final sign-off from the township’s engineering consultant to certify that the plan meets the specified conditions.

Supporting documents, including plans showing each of the four signals’ planned layouts, are included in the supervisors’ meeting materials packet for Feb. 26.

Other board approvals during that meeting included a vote to authorize the Montgomery Township Police Department to take part in an Advanced Law Enforcement Intelligence System records management agreement, which Gregan said will allow departments throughout Montgomery County to share information faster.

“It’s going to save some money, and it’s a very good system. We would’ve been looking at a software upgrade in the next one or two years, so this will avoid the need to do that,” he said.

The board also approved a one-time donation of $3,000 to the family of Robert Hensel, a 40-year employee of the Montgomery Township Municipal Sewer Authority who lost a house, car and personal belongings in a fire in early February.

Montgomery Township’s supervisors next meet at 8 p.m. on March 12 at the township administration building, 1001 Stump Road. For more information or meeting agendas and materials visit www.MontgomeryTwp.org or follow @MontTwp on Twitter.

The original article can be seen here.