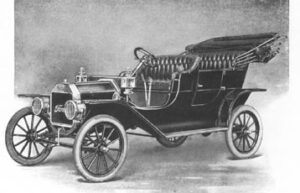 The time and place was the burgeoning City of Philadelphia in 1909. Jacob Kahn couldn’t help but notice the profusion of automobiles radically altering the lifestyles of those around him. He also possessed a great enthusiasm for building and developing land into something profitable and useful for the demands of the marketplace. Meeting those demands, Jacob spearheaded the development of numerous automobile dealerships along Chestnut Street and Broad Street, Philadelphia’s original car shoppers’ corridors. His development portfolio grew to include low-rise urban office buildings, highlighted by the Bell Telephone Building constructed at the corner of 19th and Arch Streets.

Following his service in the Navy in World War I, Jacob’s only son, Charles entered the family real estate business. Expanding on the success of his father Jacob, and seeking to meet the needs of the thrilling world of the automobile industry, Charles worked through the 1920s and 1930s establishing relationships with international oil companies including Texaco, Gulf, Sinclair and later, Shell Oil. All of these companies shared one priority; to penetrate the sprawling Metropolitan Philadelphia marketplace, and establish a circuit of selectively positioned high profile corner gas stations. Charles was blessed with the resources and knowledge to serve these requirements, and Charles’ integral relationships with oil company executives soon blossomed and led to his developing over 200 gas station sites within a 75-mile radius of downtown Philadelphia. The Company’s development base grew as retail companies such as A & P Grocery Stores, Sears, and Woolworth’s entrusted Charles with the construction, management, and ownership of several of their retail stores throughout the Delaware Valley. Charles also was sparked by the excitement of the motion picture industry and subsequently built and leased three Philadelphia area theatres for the Stanley Warner chain, while acquiring and remodeling two other theatre houses in the suburbs.

Charles Jr. made the focused decision to bring the family business into the brokerage arena, creating the opportunity to bring the two God-given commodities of land and people together for each one’s highest and best use. His overriding desire to give back to the community led him to serve numerous philanthropic organizations in meeting their acquisition, expansion and disposition activities. His wife, Barbara, secured her own Brokerage license and entered the business in the mid-1970s, lending her busy husband assistance where needed and becoming an exclusive broker for the American Heart Association of Southeastern Pennsylvania. This allowed Charles to accept leadership roles as the President of the Philadelphia Board of Realtors followed by service as President of the State of Pennsylvania Board of Realtors.

In 1982-1983, Charles and Barbara’s sons, Jim and Jeff joined Kahn & Co., thereby establishing the firm as one of Philadelphia’s few fourth generation family businesses. The two brothers sought to grow the brokerage business by expanding the client base of retail, commercial, office, industrial and institutional business throughout Philadelphia, the surrounding suburban counties and Southern New Jersey. Charles’ involvement and expertise with gasoline service stations, movie theatres, low-rise office buildings, and institutional organizations, combined with his willingness to mentor his sons, allowed the sons to ‘hit the ground running’ with a wide variety of clients and their increasing real estate needs. Simultaneously, the two brothers grew the management, investment, and development portfolio to include several shopping centers, numerous free-standing single-tenant retail sites, and a high-rise office building. The increase in property management led the brothers to relocate the Management staff to a highway accessible hub location in Fort Washington. Soon after, Jim and Jeff took on the assignment to lease and sell over 145 surplus bank branches spread throughout the states of Pennsylvania and New Jersey following the Core States/First Union Bank merger. Jeff left Kahn & Co. in 1999 to pursue another venture, while Jim focused the company on the brokerage, management, redevelopment, and acquisition of primarily retail commercial real estate.

Jim has continued to expand Kahn & Co’s brokerage services, particularly in the areas of exclusive retail Tenant representation coupled with the sales and leasing of non-profit institutional real estate. Please see our Recent Brokerage Representation link to review our base of clients served. Over the past 5 plus years, Kahn & Co has benefitted from the services of Niki Pitcavage who handles administrative assistance, data collection, graphic design, property searches and property management duties for the Company.

Finally, since late 2019, Jim has been mentoring his eldest son, Jacob, in the practice of commercial real estate sales, leasing, management, marketing, financing, development, investment and property analysis. Time will tell what the future holds as Kahn & Co approaches its’ 114th year immersed in commercial real estate throughout Pennsylvania and New Jersey.