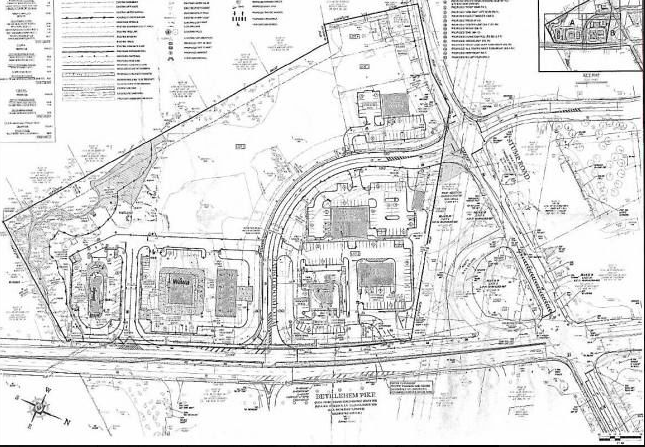 MONTGOMERY TWP. >> A new development could bring at least three businesses, a new traffic signal, and road widening to the intersection of Bethlehem Pike (Route 309) and Stump Road in Montgomery Township.

Township officials gave the first approval Monday night for a plan to build a complex of new buildings, including a planned Wawa fuel station and convenience store, a Wendy’s restaurant, and a Citadel Bank branch, on the parcels surrounding the current Sal’s Nursery and Landscaping.

“A lot of homework has been done on this. Normally, a plan like this would come in, and I get to the first step in six months, but since we’ve been looking at this for years, he’s way ahead of the curve,” said Director of Planning and Zoning Bruce Shoupe.

Nursery owner John Antonucci and a team of consultants made the case to the township supervisors Monday night for changes in the township’s highway limited industrial zoning text to allow for larger lot areas and reduced length of stacking lanes for drive-thrus in that area.

“The text for drive-thru banks requires eight cars to stay in line. When was the last time you saw eight cars going through a drive-through at a bank?” Shoupe said.

Attorney Robert Brant described the proposal to the board, saying it has already gone through the township’s zoning hearing board and planning commission, both of which have supposed those changes.

“Your township planner, and the Montgomery County Planning Commission support the draft amendments, and we’d ask you, very simply, to adopt the ordinance. We think we’re going to have a very nice development out there on the site,” Brant said.

Currently, the nursery center is located along Witchwood Drive at the southeast corner of Bethlehem Pike and Stump Road, just south of a “jug handle” turning lane for drivers making turns on and off of Bethlehem Pike, which is a divided highway on both sides of that intersection. Under the proposed plan, according to Brant and Shoupe, two buildings at the nursery center site would remain, but the grassy land to the north and east would be developed into three clusters of buildings, with an extended Witchwood Drive looping from southwest to northeast roughly parallel to the jug handle and meeting Bethlehem Pike at a new intersection. On the west side of that new intersection, within the larger loop, would be a Citadel Bank branch, a retail building, and an office building, and on the east side of the new Witchwood Drive would be another cluster of three buildings, two of which have been identified as Wawa and Wendy’s.

“We think it’s a nice, unified development for the township, and we think from the township’s perspective, the road improvements are rather extensive that will be provided,” Brant said.

New turning lanes would be added along Bethlehem Pike for access to the new businesses, and a new signal would be installed on Bethlehem Pike at Witchwood Drive to allow traffic going either direction on the highway to enter into the site — Shoupe and Supervisor Robert Birch said the total cost of the road widening and signals would likely be several million dollars.

Various versions of the plan have been discussed informally for the better part of the decade, according to Shoupe and Brant, and several outside agencies including PennDOT, the Montgomery County Conservation District, and the state Department of Environmental Protection have already been included in those talks.

A brief public hearing was held on the ordinance change Monday night, and the supervisors then voted unanimously to approve the changes. With that step now complete, Brant and Shoupe said the next step is for the various consultants and outside agencies to provide their feedback on the plans as the land development process continues, and a conditional use hearing will be needed to allow the gasoline sales at the Wawa.

“The text amendment will enable to land development plan to move forward. That’s in the queue, so it’ll be popping up pretty quickly,” Brant said. “We would hope we have the approvals, if not by the end of this year, then by early 2018.”

Birch said he was glad to see progress on a project John Antonucci had put “blood and sweat into — I’m really happy, as one of my last final acts on the board, to be able to pass this for him.”

Shoupe said the years of discussion ahead of the text amendment request, and the proposed users on board should pay off as the approval process continues.

“What they’re representing right now, is that they’ve got three new users, which is a good thing,” he said, referring to Wawa, Wendy’s and Citadel. “You’ve got six uses total, and they’ve already got four on board,” including the nursery.

“They’re way ahead of the curve,” he said.

Montgomery Township supervisors next meet at 8 p.m. on Dec. 18 at the township administration building, 1001 Stump Road. For more information or meeting agendas and materials visit www.MontgomeryTwp.org or follow @MontTwp on Twitter.

(The original article can be found here.)